Skunks – One Smelly Problem To Have

Skunks would almost not be considered a nuisance pest if it were not for the mortifying odor they produce. Skunk removal must be done in a timely manner to avoid the skunks from spraying again. Common complaints about skunks include digging in the yard, house smelling like skunk, or skunks killing livestock such as chickens. Pest Wildlife Removal companies can offer deodorization of skunk smells in the house.

Skunks are attracted to things like garbage and pet food left out at night and convenient denning sites, such as wood and rock piles, elevated sheds, openings under concrete slabs and porches, and access to crawl spaces under houses.

Preventive measures, such as removing attractants around houses, will decrease the likelihood of an unpleasant skunk encounter. This includes securing trash, feeding pets indoors, or if fed outdoors, removing food immediately after pets eat. 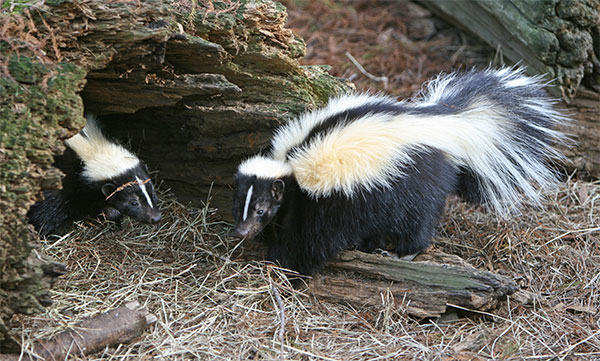 Skunks are famous for their skunk spray—you can smell an angry skunk from over a mile away. Furthermore, a skunk can “shoot” you from 10 to 12 feet, sideways, up, or down, with little apparent effort.

Skunks also dig for grubs in lawns when wet soil conditions push grubs close to the surface. When the soil dries, the grubs move deeper, so the problem can generally be stopped or prevented in the first place by not over-watering lawns.

Skunks In Your Garage?

Skunks who have wandered into a garage can simply be allowed to wander back out by making sure the door is open before dusk. Skunks are nocturnally active, so opening the door at dusk and closing it later in the evening is likely to be a solution to this problem.

Keep your dogs and cats indoors or on a leash outside, because the skunks are out. Skunks are leaving their habitats looking for mates.

It is important to make sure the skunk has not been coming and going for long enough to have established a den and given birth, and that any accessible foods (bags of bird seed, for example) have been moved and secured in tightly sealed containers.

Skunks Caught In Your Window Well

It is not uncommon for a skunk, thanks to weak eyesight, to stumble into a window well and become trapped because of their poor climbing abilities. If a skunk becomes trapped in a window well or similar steep-sided pit, provide a means of escape.

Place a rough board (or one with cleats, carpet, toweling, chicken wire, or other material to give the animal traction) that is long enough to serve as a ramp out of the well. Skunks are poor climbers, so the board should lean no steeper than a 45-degree angle.

Trying to stay out of sight of the skunk, slowly and carefully lower the board. If possible, a second person with a vantage point high enough to see the skunk (perhaps from an upstairs window) can warn of any signs of agitation.

If You Encounter A Skunk

Occasional skunk sightings in a neighborhood are not a cause for alarm. Because skunks are generally easy-going, they will not intentionally bother people. In fact, skunks may benefit humans by eating many insects and rodents many regard as pests.

Skunks use their powerful defense only when they or their young are threatened and cannot escape. Even then, they give ample warning that should be heeded—stamping front feet, a raised tail, hissing, short forward charges, and, especially, twisting the hind end around in your direction.

Spotted skunks will even contort into a characteristic handstand, rump in the air with eyes still fixed on the threat.

Move away slowly and quietly. By nature, dogs tend to ignore these warnings, so it is important they be restrained for their own good.

The traditional remedy for a “skunking” is a tomato juice bath.

To neutralize the smell, however, the chemicals in the spray must be changed into a different type of molecule, and tomato juice does not do that.

Tomato juice can, along with vinegar, and any other mildly acidic solution, wash off the oily spray to at least reduce the smell.

Commercial products are available from veterinary and pet supply outlets, but for a home remedy that will neutralize skunk spray odor on dogs, skin (not eyes), and some clothes, mix:

– 1 quart of 3 percent hydrogen peroxide
– 1/4 cup baking soda
– 1 teaspoon liquid soap (laundry or dish-washing soap)
Wearing rubber gloves, use immediately, and outdoors, if at all possible, to keep the volatile skunk spray out of your house. Rinse after five minutes and repeat if needed.

WARNING: Do not store this mixture—use it immediately after mixing. If left in a closed container, the oxygen gas released could make the container burst. This mixture can bleach fur and hair color.

Clothes or other fabric items sprayed directly may be best thrown away. Fabric that picked up the smell indirectly, as well as buildings and similar surfaces, can be washed with one cup of liquid laundry bleach per gallon of water. (This may bleach colors.)

Commercial products containing neutroleum alpha will also neutralize the odor. It is best to consult your physician for treatment if you are sprayed in the eyes. But you can ease the discomfort by liberally flushing eyes with cold water.

Skunk odors inside are usually caused by occupancy beneath the house or a discharge outside an open window. During courtship, skunks may be more prone to lose control, of their normal scent management patterns.

There are odor neutralizers on the market that work with amazing effectiveness to eliminate the stray skunk smells that might need occasional attention.

Is That Skunk Rabid?

The skunk is one of four wild animals (including the fox, raccoon, and bat) considered to be primary carriers of the rabies virus and is, therefore, classified as a rabies vector species.

Even though skunks are mostly active at night, they sometimes look for food by day—particularly in the spring, when they have young and may be extra hungry. Don’t be concerned if you see an adult skunk in the daytime unless they are also showing abnormal behaviors: